Held at the same time as Jalal Al-E-Ahmad's birthday

The Office of Scientific and International Cooperation, in collaboration with the Research Institute of Language and Literature and the Simin and Jalal House-Museum, held a virtual international meeting entitled "Jalal Al-E-Ahmad from the Perspective of Arab Writers" on 11 Azar 1399, coinciding with Jalal Al-E-Ahmad's birthday.

The first speaker at the meeting was Dr. Ali Zaeri, a faculty member of the California Institute for International Studies, who delivered a lecture entitled "A Review of Arab Writers' Perspectives on the Personality and Works of Jalal Al-E-Ahmad" with reference to translation and research on Persian works from the first The twentieth century in the Arab world began with books and essays published on Iranology in the Arab world. According to him, in the contemporary period, many writers and poets have been considered by Arab Iranologists, but Jalal Al-E-Ahmad has a different position in this regard since he has written in various fields such as short stories, novels, travelogues, critiques, ideas and so forth. Is. Ali Zaeri went on to translate Al-E-Ahmad's works and research on them into Arabic in the form of topics such as the beginning of the Arabs turning to Al-E-Ahmad, works published in books, academic journals, and the views of some Arab Iranian scholars on him.

The second speaker was Dr. Masoumeh Nemati Qazvini, a faculty member of the Institute for Humanities and Cultural Studies. "Contemporary Egyptian writer and physician." Nawal Saadawi, an Egyptian writer, social activist and physician, first traveled to Iran in November 1968 to attend a medical conference. After searching for the most prominent Iranian literary figure at the University of Tehran, Jalal Al-E-Ahmad is introduced to him. After many searches, he finds his address and meets him at his house. At first glance, the simplicity of his glorious life amazes him. During the meeting, which lasted for hours, the two writers discussed issues such as the internal situation in Iran, the issue of Palestine, Jalal's works, and the literary relationship between Persian and Arabic literature.

Two years later, Nawal intends to go to Iran this time under the pretext of attending a conference and only to meet with Jalal again, but SAVAK due to his meeting with Jalal on a previous trip and the publication of an article about Iranian intellectuals and writers in one of the newspapers The Egyptian forbids him to enter. Although Nawal heard the news of Jalal's death at the Iranian embassy, ​​he never believed it and left for Tehran despite not having a visa and possible dangers such as being arrested by security forces. At the airport, he miraculously receives a visa and goes straight home from there. Facing Simin Daneshvar's sad and pale face confirms the news of Jalal's death. After meeting with Simin for several hours and talking to him about how Jalal died, his glorious funeral, the ban on publishing his works in Iran, the literary repression in the country, the suppression of opposition literary figures and the formation of secret campaign organizations and Simin's works, Nawal forever He leaves home and after meeting some literary figures, visits some of the sights of Tehran and a short trip to Isfahan and Shiraz for Cairo.

After these two lectures, a virtual visit was made to the House-Museum of Simin and Jalal. During the visit, which was supervised by Reza Tavassoli, the director of this House-Museum, different parts of Simin and Jalal shared house, including the reception area of the house, which was the place where the Writers' Association of Iran was formed, Jalal's office, Simin's office, the library, the cellar and the courtyard and other parts of the house, as well as photographs, contracts and wedding rings and other personal belongings were displayed.

The next speaker at the meeting was Dr. Majid Marhaj Robat, Director of the Persian Department at Wasit University in Iraq, who delivered a speech in Persian entitled "Contradictions in the Life of Jalal Al-E-Ahmad from the Perspective of Arab Writers." He pointed out that Jalal Al-E-Ahmad belonged to a religious family and after finishing high school, he went to Najaf Ashraf seminary at the urging of his father. But his family opposed his continuing studies in Lebanon and feared doubts about his religious beliefs. But his life record shows that he has gone through ups and downs at different stages of his life that are considered by an outside observer. Due to the strong connection between Persian and Arabic literature and the place that Al-E-Ahmad has in contemporary Persian literature, Arab writers have different interpretations of his writings and ideas, some of which were mentioned in this lecture.

After his presentation, Gholamreza Emami, with whom Jalal and Simin had a close relationship from a young age until the end of his life, wrote articles about Jalal Al-E-Ahmad and responded to some of Majid Marjab Robat's criticisms of Jalal's life and intellectual and political record.

The final speaker was Dr. Ahmad Mohammad Jad, a faculty member at the Suez Canal University in Egypt, who was unable to attend due to problems and gave a summary of his lecture entitled "The Effectiveness of Descriptive Narrative in the School Principal". According to Mohammad Jad, Jalal's special interest in different classes of people led his critics to consider him as a writer and social thinker. In this lecture, the influence of Jalal Al-E-Ahmad on the Persian novel based on the element of description in the narration was examined. 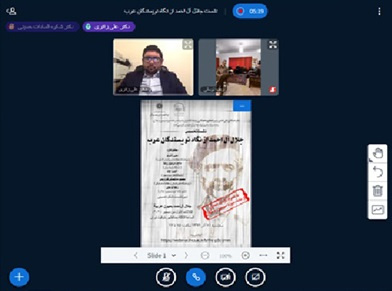 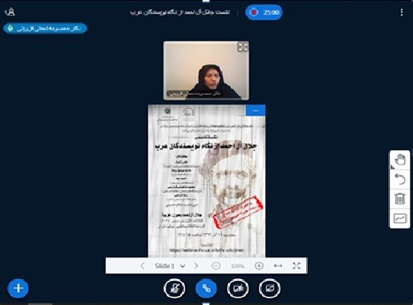 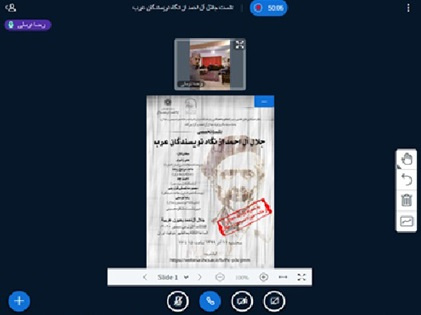 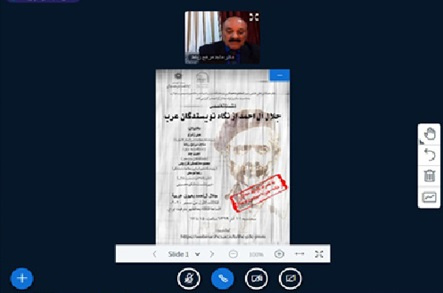