report on the meeting

The international webinar “Art in Crisis” was organized by the International Office of Scientific Cooperation at the Institute of Humanities and Cultural Studies, with the participation of Iranian and foreign artists and researchers on August 2nd, 2020 from 16:00 to 20:00.

At the beginning of the meeting, Dr. Shokooh Hosseini, director of the International Office of Scientific Cooperation at the Institute of Humanities and Cultural Studies, welcomed the participants, thanked the artists and the speakers of the session and mentioned the reasons for holding the meeting: “The original idea for this online meeting was inspired by a series of artistic performances during the Covid-19 time, when people around the world were in lockdown. The artists responsible for these performances are trying to show the social aspect of art. It would seem that music with its common global language and performance with its instant rapport with the listener have the capacity to communicate more effectively than other artistic genres in the domain of cyberspace when distance relationships are forced upon us. Based on this premise, we contacted relevant artists who agreed to speak with us about the motives and incentives behind their work, in particular at the time of crisis.”

At the end of her explanation, Dr. Hosseini added: “In the first panel, we are going to hear our guests’ experiences and views regarding the art they are engaged in. And in the second panel, we intend to look at the phenomenon of art and its connection with the crisis using a philosophical perspective.”

Then, Dr. Rohollah Hosseini, faculty member of the Faculty of World Studies at Tehran University and Head of International Affairs in the Ministry of Culture took over the chair.

In the first panel, titled "Music in the time of Covid 19", the three musicians participating in the meeting first introduced their activities and then explained their prominent works during the quarantine. 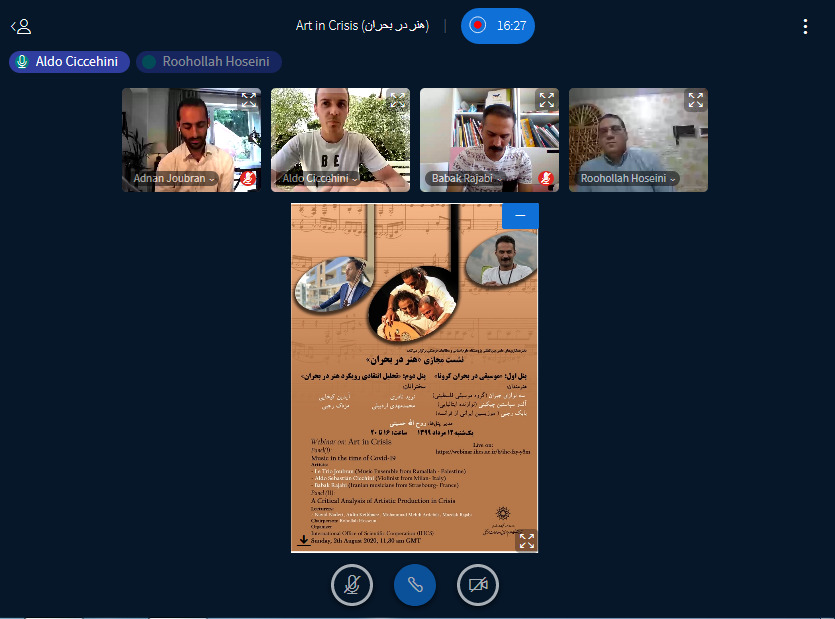 Samir, Wissam and Adnan, three brothers from Ramallah, play oud. They play the message of Palestine to the people of the world in the form of musical notes and show their experience in a more deep-rooted crisis. For decades Palestinians have lived with a crisis deeper than that in which they now find themselves, whereby neither in the street nor in the home can they feel safe. Paradoxically, although in their homes are safe from Covid-19 Palestinians are still not safe from those who have occupied their lands. The brothers’ symphony is a response to and a reflection of the struggle of the Palestinian people. On behalf of his brothers, Adnan talked about the experience of virtual concerts during the Corona crisis.

Aldo Sebastian Cicchini, a 32-year-old Italian violinist in the National Symphony Orchestra of Italy, started a so-called "balcony concert" with his evening rehearsals on the balcony of his house, which was seen millions of times in social media and triggered other artists to take interesting initiatives. He also spoke about his lived experience in this process.

Babak Rajabi, a 38-year-old Iranian musician living in France who has been performing on the Internet for some time, has recently performed some musical pieces based on farcical poems on the subject of Covid-19. In his performances he uses traditional Iranian musical modal systems combined with an educational approach thereby changing a global threat into an opportunity to acquaint wider audiences with traditional Iranian music. In this meeting, Rajabi spoke in detail about the history of the encounter of artists and poets in various historical crises, and pointed out the impact of Corona on his professional work and the differences that Corona had on his art.

Navid Naderi holds a PhD in Literature (Literary Theory and Cultural Studies) from Duke University in North Carolina who currently focuses on the history of philology and “world literature”. In this meeting, he discussed the concept of “world music” and some of the historical structures governing music production in this cultural atmosphere. He tried to answer this question: “Does the Corona crisis has fundamentally caused a difference in the way music is produced in the world or not?”

Aidin Keikhaee holds a PhD in Political and Social Thought from York University in Canada and is a faculty member at the Institute for Humanities and Cultural Studies in the field of critical theory (especially Adorno), who currently focuses on “Critical Aesthetics in Iranian Music”. He began his remarks on the issue of the "truth and falsehood" of art and its dependence on how the work of art confronts the (global) industry of culture/entertainment. He finally argued that the corona pandemic has not changed the fundemental relations of today’s world and this is why the term "post-corona" can only be used in a very limited and definite way (and not in general terms like the post-corona world).

Mohammad Mehdi Ardebili holds a PhD in Western Philosophy from the University of Tabriz and is a faculty member of the Department of Philosophy of Culture at the Institute of Humanities and Cultural Studies. With the theme “Hope for Art”, he raised the question of whether art can work in the time of the crisis or not. If yes, how? In this regard, he advanced the discussion on the idea of the “Art’s Mission” and finally provided a critical evaluation of the performed works.

Mazdak Rajabi, PhD in Neoplatonic and Medieval Philosophy from Shahid Beheshti University in 2008, is currently on the verge of defending his thesis on Hegel’s Philosophy and Contemporary Philosophy in the Dominican University College in Ottawa, Canada. He is also a faculty member in the Department of History and Western Civilization of the Institute for Humanities and Cultural Studies. In this meeting, he discussed the situation of today’s world which is facing the death of metaphysics, the death of religion and the death of art and examined art’s relationship to our current situation. And in a crisis like the current one, what reaction does the so-called art present?